What Has Lead Me Down This Path? A Brief History Of Motorcycle Riding.

Posted by The-Dude on November 4, 2021 in Uncategorized 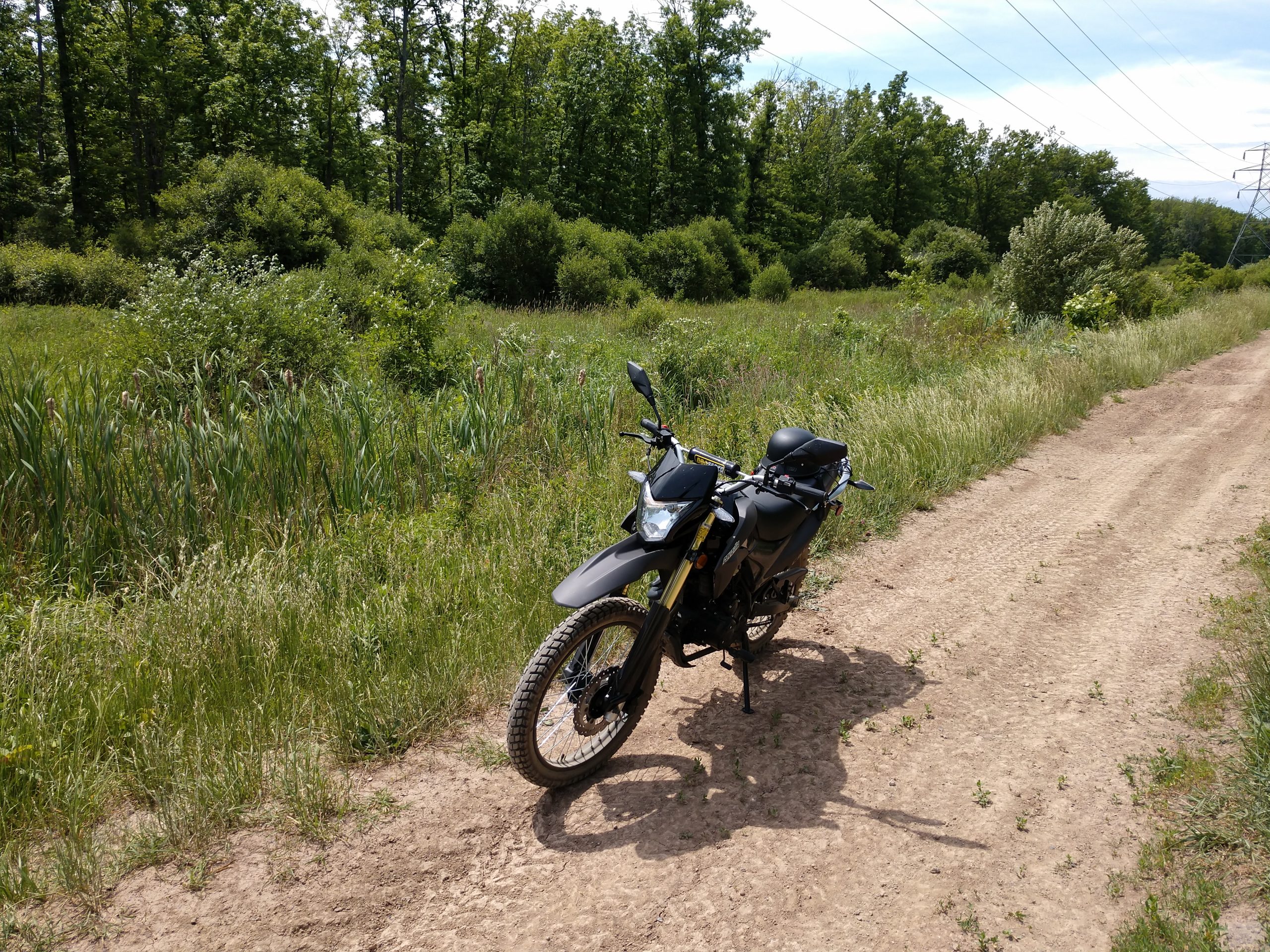 I’m not sure when exactly I fell in love with motorcycles. I remember having a passion for motorcycles at a very early age. I pretty much grew up around them. My father road motorcycles until my mother got pregnant with me. She asked him to quit riding when she got pregnant because she didn’t want to raise a child on her own. My father gave up motorcycles and boat racing for me right after I was born.

Surprisingly my mother also road a Honda scooter. I guess in the 50s that was a pretty bad ass thing for a women to do. She road through about three quarters of her pregnancy with me until my grandmother made her give it up. I guess my grandmother came out of the house yelling at my mom one day as she climbed onto the scooter all pregnant. The story goes, the next day mom sold the scooter. So you could say my fascination with bikes could have started before I was even born.

My earliest memory of wanting a motorcycle was when my cousin got his 1973 Harley Sportster. I remember all the men in the family gathered around the bike before our big weekly family dinner talking about motorcycles. This happened almost every Sunday at Grandmas house when my cousin showed up for dinner. Male bonding in it’s most primal form. Men huddled around motorcycles talking about wild times and adventures. I was probably around 5 or 6 then.

My cousin also threw a crazy Fourth of July party every year that included all his biker friends and the family. Those were really fun parties. Again, I was a child and barely remember. I do remember checking out all the bikes as they lined the street from one corner to the other with my father. I also remember all the long haired hippies and bikers. It was the 70s and these weren’t the typical people that showed up to our family gatherings. 🤣 That’s all I really knew back then.

I know exactly when I caught the riding bug though. My dads buddies used to come by the house often on their motorcycles. When I was around 9 or 10 they talked my father into letting me go with them one day. They sat me on the back of a bike and we went riding all around the city that day. My mother was absolutely furious about it when I got home. I still remember the argument. I think it was that ride that changed everything though.

From that day on I begged my father for a mini bike and that Christmas he got me one. We’d take it to this huge factory parking lot a few days a week after my father got home from work and I’d drive it around in circles until the sun started to set. It was a beat up, second hand, red mini bike with a really tired 3HP engine. That’s horsepower, not Hive power. It wasn’t very pretty but we managed to keep it running until my 12th birthday when my father came home with a used 60 cc Yamaha trail bike.

I found a YouTube of a guy that restored one. This is an exact replica of my first motorcycle, only mine didn’t have the racing stripes on the fenders.

I swear to the gods I drove that motorcycle from morning until night. On school days I’d come home from school, eat dinner, then out riding until the sun started to set. My parents never knew where I was outside of I was somewhere on a trail riding my dirt bike. God I loved that bike!

My next dirt bike was an RM 80. Just a little bigger and a little faster. I got that my freshman year of high school. Then by the end of high school I had a street legal Honda XR 200. I guess that was considered an early dual sport or enduro.

As soon as I got out of high school I purchased my first street bike. It was a Honda CB400. It only had 4000 miles on it. I rode that for several years.

After the Honda CB400 I purchased a Suzuki GS750E. A friend built it for the drag strip. It was pretty much a drag bike on a stock frame. I ended up buying it off him and road it on the street. It was a lot of fun, it rarely lost a race on the street, and most people couldn’t believe how fast that bike was. I only kept it for about 2 months because I was smart enough to know that bike was going to be the death of me!

I don’t know what happened, but I took a break after the GS. I went several years without a motorcycle. It wasn’t until my late 20s when I had car problems and financial problems. I was walking all over the place and a friend mentioned he had a running motorcycle sitting behind his garage. He knew that I could work on them and told me if I could get it started he’d give it to me for $100. I stopped by the next day, tinkered with it for about a half hour and got it started. It was another Yamaha. A small 400. I think it was a Maxim for some reason but not sure about the name.

That was such a fun motorcycle. I was working in the entertainment and nightclub industry in Buffalo. I’d get hammered and leave that bike wherever I was when I was to drunk to drive. Then I’d spend half the next day calling friends asking if I left my motorcycle there. I must have lost that bike once a week… The conversation would go something like this.

Me: “Hey bro, lost my bike again. Did I happen to have it when I stopped by your place last night?”

Friend: “Nope, don’t remember you being on a bike.”

Me: “Do you happen to recall where I was before your place.”

Friend: “I think you came from Allentown”

That generally narrowed it down to the club and bar district and about 10 places I could have left it. It often ended up in bars at closing time when a friend would see it parked out on the street and push it into the entrance way of the club to keep it safe behind locked doors. You’d often find me standing in front of clubs waiting for it to open so I could get my motorcycle. 🤣

Again I went a few years without a motorcycle. I moved to Las Vegas and was excited about getting a new bike there. Although they have 12 month riding weather, the traffic there is just ridiculous. I decided against it. My wife at the time wasn’t comfortable with it, and frankly neither was I.

That brings us to today. I started riding again a few years back. It was the end of the 2017 crypto bull run. I did really well. I decided I needed a hobby outside of crypto. I picked up a 2003 Honda Shadow. I started riding it and instantly fell in love with riding again. I had forgotten how much I enjoyed riding.

I think that Honda brought on the infamous mid-life crisis that is this blog. After I started riding again, I realized at 50 years old, I don’t have much of this left in me. I started thinking about that cross country trip I promised I’d take some day when I was much younger. Why hadn’t I gone? Oh yeah, grown up life has a habit of getting in the way!

I now had the means to take the trip and the more I thought about it the more I began to think I needed to do this. Most guys have a mid-life crisis motorcycle, I wanted to live my Easy Riders fantasy and ride a motorcycle cross country. Let’s call it what it is… A bucket list ride that if I don’t do it soon, I probably wont be able to do it ever. Between old age, health, and whatever life throws at me, now is the time to do this or it’s just not going to happen.

This brings us to today and how I discovered dual sport, adventure, and distance riding. I purchased a DR650 dual sport. I was watching some videos on YouTube of people traveling on these bikes and I was immediately hooked. I set a goal to purchase a dual sport motorcycle and the birth of this mid-life crisis blog had begun.

I wasn’t sure if I was going to like off road riding at my age so I purchased a cheap Chinese dual sport from CSC Motorcycles. It was a TT250. I instantly remembered how much I love trail riding and two years later I bought the DR650 for distance riding and off road travel.

For now, I’ll leave things here. I think my next post will be about riding into my fifties and getting involved in this lifestyle at my age.